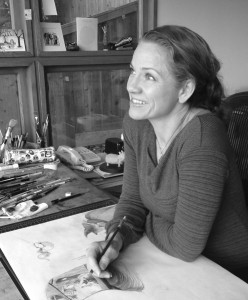 Alexandra Boiger was born in Munich, Germany, and studied graphic design. Her work as an animation assistant brought her first to England, and then to DreamworksSKG in the United States. The first picture book she illustrated, WHILE MAMA HAD A QUICK LITTLE CHAT, was published by the legendary Dick Jackson books, and was a Fall 2005 Book Sense Pick and a recipient of a Parents’ Choice Award. She has illustrated the TALLULAH series, written by Marilyn Singer, including TALLULAH’S TAP SHOES, the fifth book in the series. Fall 2015 marks Alexandra’s debut as both author and illustrator, with MAX AND MARLA, the first in a picture book series, published by Putnam. Alexandra’s work has been named to various state reading lists, including the Iowa Children’s Choice Master List, Chicago Library Best of the Best, and the Florida Sunshine State Young Readers Award, among others. She is proud to have been invited by Studio Ghibli to contribute an original work to be included in the Mary Blair Centennial Exhibition that traveled throughout Japan. Alexandra now lives with her husband and daughter in California.