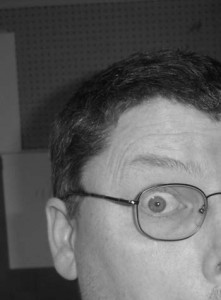 So one day Frank Dormer is looking out his window, and he sees socks on the ground. And there are no feet in them. So he yells, as loud as I can, “you kids better put on those socks on or SOCKSQUATCH will get you!” So after that he thought about it, and realized that his kids were just having fun, and dad was wayyy too over the top with the yelling. But then he thought this might be a good book for kids. So Frank became the author-illustrator of SOCKSQUATCH, published by Henry Holt. Frank has also illustrated many other books (without socks in them), such as the AGGIE AND BEN series of easy readers published by Charlesbridge, and the middle grade series THE ADVENTURES OF JO SCHMO, published by Houghton Mifflin Harcourt. But there was another time Frank thought it might be fun to write a story about a pen that wouldn’t write what people wanted it to. And alas, that book became THE OBSTINATE PEN, which got mentioned in the New York Times and the Wall Street Journal. His author-illustrated picture books include the forthcoming WE HAVE A PLAYDATE! (Abrams, 2022), FIREFIGHTER DUCKIES (Atheneum, 2017) and THE SWORD IN THE STOVE (Atheneum, 2016). So let that be a lesson to you. Don’t leave your socks out on the ground around Frank.