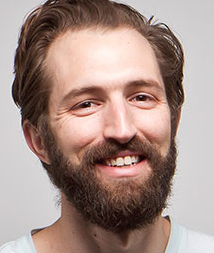 Steven Weinberg began putting drawings next to words in his first-grade journals. Although he has moved on to different mediums (using a lot fewer scrawling crayons) and his spelling has greatly improved, his love of telling stories with pictures is just as strong. His first book, TO TIMBUKTU: NINE COUNTRIES, TWO PEOPLE, ONE TRUE STORY, an illustrated travelogue written by his girlfriend, Casey Scieszka, was published in 2011 by Roaring Brook Press. It is the story of Steven and Casey’s first two years out of college when they traveled, worked, and lived from Beijing to Timbuktu. The book received a Publishers Weekly starred review, and Booklist called it a road map for teens itching to get out into the world. Steven has focused on writing and illustrating picture books as he rekindled those first grade memories. His first picture book, REX FINDS AN EGG! EGG! EGG!, has been published by Margaret K. McElderry Books, and will be followed by his second picture book, YOU MUST BE THIS TALL. He also works on a variety of advertising, illustration, and mural projects from his studio and home in the Catskills, NY.