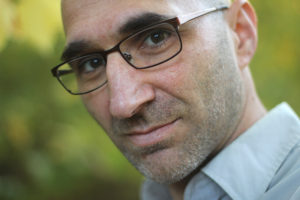 Aaron Becker is the creator of JOURNEY, his debut children’s book, which was a 2014 Caldecott Honor, a New York Times best seller, and was named a best book of 2013 by The Huffington Post, Amazon, The New York Times, NPR Book Concierge, Wall Street Journal, Redbook, Christian Science Monitor, Kirkus, School Library Journal, Horn Book, American Booksellers Association, New York Public Library 100 Titles for Reading and Sharing, and Capitol Choices. JOURNEY is the first title in a trilogy that was followed by QUEST (2014) and RETURN (2016). His work has sold in Germany (where it was the recipient of the prestigious Leipziger Lesekompass Award), Holland, France, Italy, Denmark, Sweden, Russia, China, Spain, Korea, Japan, Brazil, and others. Prior to creating children’s books, Aaron spent much of his professional life as a conceptual artist for film studios, including Pixar, Lucasfilm, and ImageMovers Digital. Some of his film credits include A CHRISTMAS CAROL, THE WAR OF THE WORLDS, and THE POLAR EXPRESS. A graduate of Pomona College with a BA in media studies and a minor in fine art, Aaron also studied illustration at The Art Center College of Design in Pasadena. Aaron lives in Western Massachusetts with his wife and daughter.