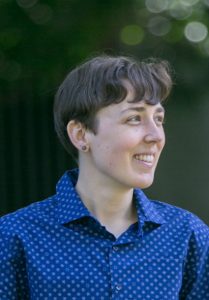 Maia Kobabe is the author and illustrator of THE THIEF’S TALE, a medieval fantasy comic, and TOM O’BEDLAM, a single issue which was accepted into the Society of Illustrator’s Comic and Cartoon Art Annual in 2016 and nominated for an Ignatz Award. E also created interior art for Joy McCullough’s WE ARE THE ASHES, WE ARE THE FIRE (Dutton, 2021). Maia’s work is included in the comic anthologies ALPHABET (2016), TABULA IDEM (2017), ADVANCED DEATH SAVES (2017) and the coloring book QUEER HEROES (2016). Eir work has appeared in The Nib, The Press Democrat, The Pacific Sun, SF Weekly, CCA’s Glance magazine, Calendar of Tales, The Comics Beat and on NewYorker.com. E worked for over ten years in libraries and now writes book reviews for Publisher’s Weekly. E has been self-publishing comics and zines since 2010, and has attended over fifty comic conventions in that time. Maia is a graduate of the MFA in Comics program at California College of the Arts, and lives in the Bay Area. More of eir work, including the GENDERQUEER series, can be found on tumblr and instagram @redgoldsparks.