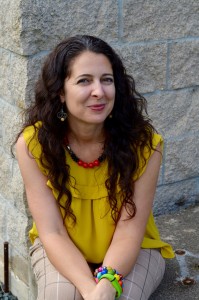 Katie Sciurba has wanted to write children’s books for as long as she can remember. As a girl growing up in Los Angeles, she penned (and tried to illustrate) stories on paper tablets left over from her grandfather’s job at a factory, during her grandmother’s very very long “siestas,” when she was not allowed to go outside. As a college student at the University of California – San Diego and the Universidad de Granada in Spain, Katie studied creative writing and later, while pursuing her MFA in Children’s Writing at The New School, signed a contract for her first picture book, OYE, CELIA!: A SONG FOR CELIA CRUZ (Henry Holt, 2007). In addition to OYE, CELIA!, which was named a Bank Street Best Children’s Book of the Year and a CCBC Choices Book, she has written numerous texts for children learning English in South Korea. She is an avid salsa dancer and lover of music and has also published articles, mostly about musicians and dance, for FACES Magazine. Dr. Sciurba is a former Bronx elementary school teacher with a PhD in English Education from New York University. She is currently Assistant Professor of Literacy Education at San Diego State University – Imperial Valley, and she lives with her husband and their two sons.