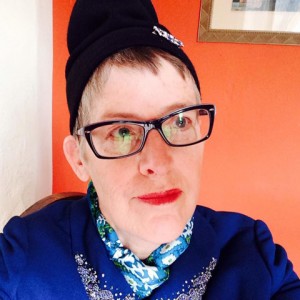 Jill McElmurry grew up in Los Angeles, Taos, and Santa Barbara. She studied art at SUNY Purchase and the School of Visual Arts in New York for a short while, but she’d been drawing and painting on her own for a very long time. Her father worked as a character designer for Walt Disney, Quartet Films, and Jay Ward Productions; her mother was a fashion illustrator in New York and California; her grandfather was a scenic painter for RKO Films (along with Byron L. Crabbe, he did the matte painting for the 1939 classic KING KONG); and her grandmother was a dainty devotee of the terpsichorean art (LA Times, 1921) with the Theodore Kosloff Company. When Jill’s first book, MAD ABOUT PLAID, was published in 2000, SLJ said, “innovative and delightful, this tale may just cause a new fashion sensation.” Since then, Jill wrote and/or illustrated more than a dozen books, which regularly received starred reviews and have been recognized as Booklist Editor’s Choice, Bank Street Best Children’s Book of the Year, NCSS Notable Social Studies Trade Book, Sydney Taylor Notable Books, and ASPCA Henry Bergh Human Heroes Award, as well as being named to various state reading lists. LITTLE BLUE TRUCK and LITTLE BLUE TRUCK LEADS THE WAY, both written by Alice Shertle, are Publishers Weekly and USA Today bestsellers and have been adapted as board book and big book editions. Her final book is LITTLE BLUE TRUCK’S SPRINGTIME (2018). When not producing books, Jill enjoyed canoeing, painting, house renovation, and relaxing with her husband and dogs on their Higglety Pigglety Farm in New Mexico. Jill passed away in 2017.