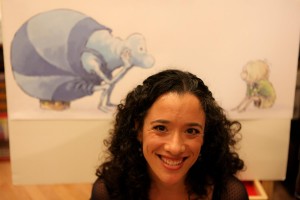 Caron Levis felt like she was writing her first book at age two as she called out, “one pickle . . . cherry pie! . . . still hungry!” whenever her mom read Eric Carle’s THE VERY HUNGRY CATERPILLAR. At Tufts University she studied creative writing and acting and spent much of her time dressed up as pigs, blowfish, soup-cans, and Wild Things as part of a children’s theatre troupe. And so, when she declared that she wanted to write books for kiddos, everybody said, “duh!” Caron’s first picture book, STUCK WITH THE BLOOZ, published by Houghton Mifflin Harcourt (Fall 2012) was selected as one of Bank Street College’s Best Children’s Books of the Year. Her story “Permission Slip,” inspired by her work with teens, was listed in the Best American Non-required Reading 2010; published in Fence Magazine and FAKES, an anthology by W.W. Norton. Other stories have been published by the New Guard Review, Persea Books, nominated for a Pushcart Prize, and earned fellowships from the Saltonstall Foundation and the New York Foundation of the Arts. For over ten years, Caron has been using drama and creative writing to teach social/emotional, communication, and literacy skills to kids of all ages. Her upcoming picture books include IDA, ALWAYS, illustrated by Charles Santoso, (Atheneum, 2016), MAY I HAVE A WORD?, illustrated by Andy Rash (FSG, 2017), and STOP THAT YAWN!, illustrated by LeUyen Pham (Atheneum, 2018). She is the student advisor and an adjunct professor in the New School University’s Creative Writing for Children and Young Adults MFA program where she earned her degree. She lives in her hometown of New York City.