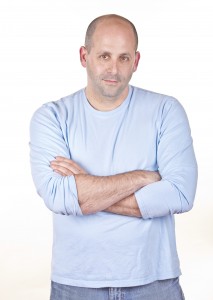 Eric Luper tried to escape his literary destiny by going to chiropractic school. Soon he discovered that, although he made a great doctor, his heart was somehow wrapped around putting words onto paper. Although he has treated scores of professional athletes, pop stars, rap artists, rock performers, and movie stars, he was happiest when his first young adult novel, BIG SLICK, was published by Farrar, Straus & Giroux in 2007. Since then he has published two more young adult novels, BUG BOY (FSG) and SETH BAUMGARTNER’S LOVE MANIFESTO (Balzer + Bray). He made his middle-grade debut with JEREMY BENDER VS. THE CUPCAKE CADETS (Balzer + Bray), which published in 2011. Audio rights to both LOVE MANIFESTO and CUPCAKE CADETS were sold to Brilliance Audio and Listening Library, respectively. Eric has worked on tv tie-in projects for “The Amazing World of Gumball,” “The Regular Show,” and others, and has enjoyed creating some tie-in Mad Lib titles. Most recently, he created the Scholastic book club original CHOCOLATE LAB, which will become a series with two more titles under contract. Keep an eye for his other upcoming series also with Scholastic: THE KEY HUNTERS! Eric lives in Albany, New York, with his wife, Elaine, and their children, Ethan and Lily. He still works as a chiropractor, but he always manages to find time to write—usually after everyone else has gone to sleep.