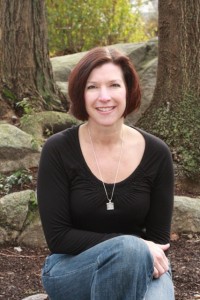 Ann Haywood Leal comes from a long line of musicians, artists, and teachers. Since she’s never been able to carry a tune, she was always given plenty of writing supplies and allowed to use the sharp scissors. Eventually, she put those writing supplies to good use and wrote her middle-grade novels, ALSO KNOWN AS HARPER and A FINDERS-KEEPERS PLACE. ALSO KNOWN AS HARPER was chosen by the Chicago Public Library for their Best of the Best List of 2009-2010, was an ABC Good Morning America Summer Reading Choice for 2009, and was featured on NBC Nightly News in 2011. It has been named to several state book award lists, including the Arkansas Charlie May Simon Award, the Iowa Children’s Choice Award, the South Carolina Book Award, the Oregon Battle of the Books, and the William Allen White Award. She recently contributed to Black Dog & Leventhal’s MY BOOKSTORE: WRITERS CELEBRATE THEIR FAVORITE PLACES TO BROWSE, READ, AND SHOP. Ann lives, writes, and teaches elementary school in southeastern Connecticut.